"12 Days of Christmas Movies" continues with a heartwarming tale in the grand tradition of ostracizing someone just because they are different until they prove their worth and then they get to nail Zooey Deschanel. If you haven't seen this movie, go watch it now, it's Christmasy. After watching it, feel free to read the rest of the post. Ladies, Gentleman and the fine people of Denmark, Day 2's movie is one not even the Central Park Rangers could stop from being released.... 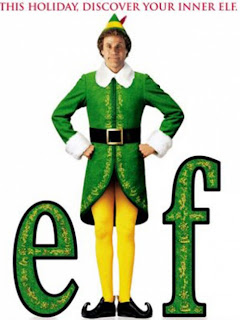 The Plot According To j.Bowman...

I should open this up with a disclaimer: Sadly this is not a spin-off movie from "The Santa Clause" starring David Krumholtz as the most bad ass elf in Christmas movie history, Bernard. 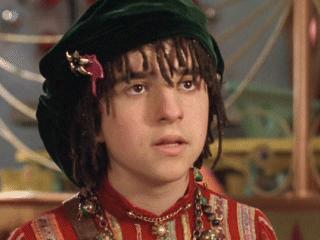 (The spin-off is actually on TV and is called "Numbers")

Will Ferrell plays a human baby (well, he doesn't play the BABY, but you know what I mean) who crawls into Santa's bag on Christmas eve at an orphanage and gets taken back to the North Pole. There he grows up and is shitty at everything he does because everyone who lives there is a bit of an asshole. Seriously, they are dicks. Let's start from the top:

Santa - Didn't notice that a live baby had crawled into his sack at the orphanage. Here is where I have a problem with this. How did Santa know when the baby climbed out of the sack at the North Pole that he was from the orphanage? Clearly he went to more houses after that, because if he was finished his sack would've been empty and he (hopefully) would've noticed a live baby moving around in there. Instead he carried around a baby for the rest of the night and then upon discovering it, was too lazy to verify where it came from and decided to keep it. For all he knows, the kid had a family. Oh well, lesson learned, according to Santa, babies fall under the same rules as stray cats. 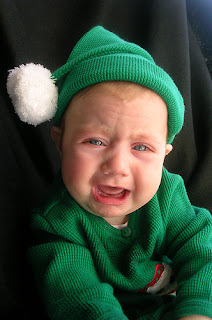 (Santa doesn't give a fuck if he wants his mommy & daddy)

The other Elves - These assholes were the catalysts behind this whole thing. They were the ones who put the idea in Santa's head that the kid came from the orphanage. They ended up being right, but that is besides the point. Santa just blindly goes along with the guy who says "He must've crawled into your bag at the orphanage". Perhaps do a little research? According to the early scenes of the film, the elf code is as follows: 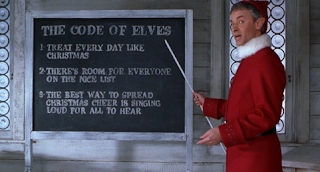 (Elf Code is pretty vague on kidnapping and lying)

Nobody seems to want to return the kid, but nobody seems to be into taking care of him (jerks). The elf who eventually adopts the baby (Santa doesn't even take responsibility for the kid he decided not to return) drops this gem on us while narrating the opening sequence.


"So, Santa had a decision to make. Thankfully when it comes to babies santa is a pushover"

What the hell does he mean "thankfully"? What was going to happen to that kid if Santa hated babies? 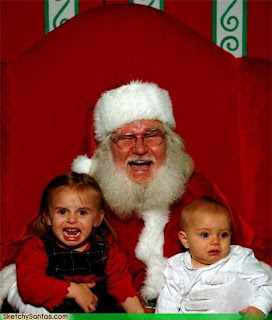 (It's best not to think about it)

Now it isn't just Santa that's the problem, but the entire Elf community. They all know Buddy is human, yet they expect him to be able to do elf things as well as they do. That's bullshit. He goes to his job and they get on his case because he only builds like 70 something "Etch-a-Sketch's". Surely that is amazing for a human to do, but the elves make him feel like a failure, or a "cotton headed ninny muggins" as he sadly refers to himself. (judging by the audible gasps, that must be to elves what "Powder" is to us pale people. An ugly, ignorant slur) 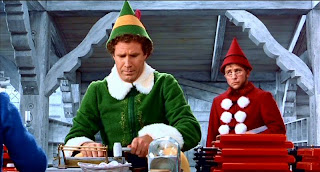 They don't fire him, that would be too kind. Instead they transfer him to a job he clearly hates and is terrified of: testing jack in the boxes. 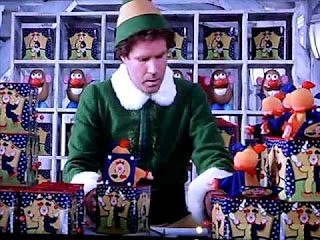 (It's either this or he cleans the stables)

Now the elf society seems pretty heavily based on work, but at no point is there any indication given that these little guys are paid. Judging by Santa's stance on child abduction, I highly doubt worker's rights is high on his list of things to care about. No matter who you are, you can only remain cheery for so long while you are being exploited. I look forward to "Elf 2: Money Never Sleeps". 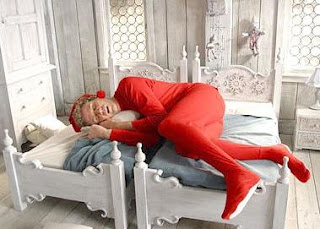 (Buddy the Elf is not money)

There is another thing about the whole scenario that doesn't sit right with me. Look at that picture up there. During the opening parts of the movie (which yes, I'm still ranting about) Buddy the Elf (awesome name, well done) is shown constantly trying to adjust to small furniture and buildings with hilarious results. 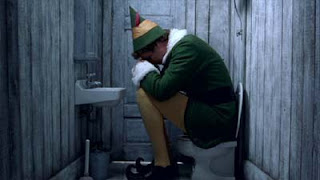 (I hope he's only crying)

Actually when you think about it, the situation is just another prime example of how much dickery the North Poleans were capable of. It is well established that a)They know Buddy is a human 2)They are fantastic builders and craftsmen c)They are aware that humans are substantially bigger than elves. They proceed to take those three pieces of info and wipe their tiny asses with it. They don't build him any large furniture or anything that would make his day to day life even remotely comfortable. Instead they elect to keep up the ruse that he is an elf so he doesn't feel like an outsider.

So they forced Buddy to live in an elves world, knowing full well that he was a human and was going to be a shitload bigger than them. They couldnt take 1 day off of toymaking to build him a fucking bed or a shower big enough for him? Assholes. Then they decide it's time to tell him the truth about where he came from when he becomes increasingly distressed about how he doesn't fit in to the only world he knows.

("Oh hey, by the way, we've all been lying to you for years and forcing you to use uncomfortably tiny furniture. Sorry about that")

Buddy decides to go to New York City and find his real father, thus ensuring his spot in the "Bad Judgement Hall of Fame". Everyone at the North Pole is aware of what the outside world is like but they neglect to coach him on how to deal with it. So basically he breaks off a piece of ice to sail on and leaves for New York. One would assume he stopped off in Canada for a bit, based on the fact that later in the movie he carries on the proud Canadian tradition of putting Maple Syrup on spaghetti. 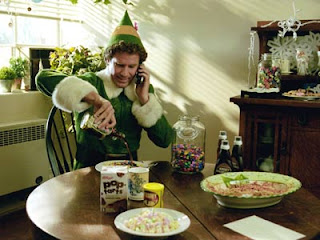 (Really is the best part aboot having spaghetti, eh?)

So yeah, Buddy goes to New York, meets up with his dad, who is known by everyone to be a complete dick (he is on the naughty list, so it's not like this was new info to anyone) and charms the woman I refer to as "Infinite Cuteness", Zooey Deschanel.

(Elf, starting the proud tradition of her singing in every movie she's in)

And yeah, hijinx ensue. Buddy proceeds to warm the hearts of everyone around him, when he's not throwing snowballs at kids faces or getting his ass kicked by midgets. 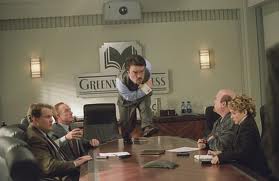 (This is moments before the greatest dropkick ever seen on film)

That's all I care to discuss about the plot, let's go to the rundown:


What solidifies it's status as a Christmas movie?

Two things. A)It's soundtrack is comprised entirely of Christmas Carols and there is even a mass sing-a-long of "Santa Clause is Coming to Town" (which is more of a threat if you ask me). Another thing that solidifies it as a Christmas movie: It's called "Elf" and features no Legolas whatsoever. 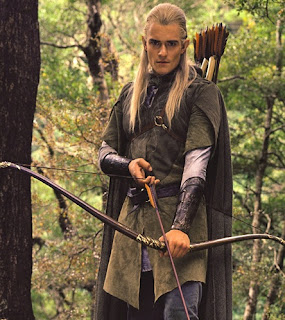 (A movie called "Elf" can only really be about two things)

Buddy finally sees Santa for the first time after he's been able to process all the horrible bullshit he put him through. It plays out exactly as you think it would.

One could argue it is because this particular Santa is a "fake" or an "imposter" (Buddy may say something to that effect once or twice), but I can see what's REALLY going on here. Buddy is unleashing his pent up, sugar coated rage.

Buddy the Elf: (Re: Warehouse) This place is just like santas workshop, only it smells like mushrooms and everyone looks like they want to hurt me.

After Leon the snowman confirms that buddy isn't an elf, Santa drops this sick burn:

Mr. Narwhal, for his brief appearance and genuine encouragement. 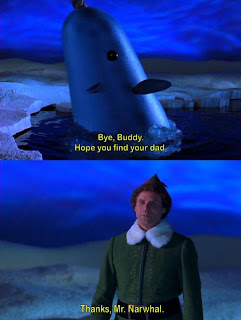 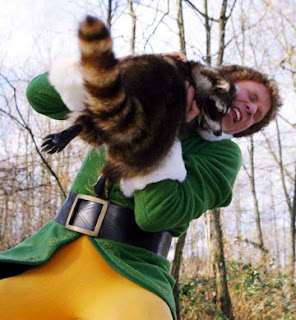 The movie wouldn't have happened if...

The movie didn't exist in a fantasy world. I'm not talking about the existence of Santa or elves or James Caan. Those I could understand existing. What I'm talking about is a world where Buddy doesn't get arrested for sneaking into the bathroom when Zooey is showering and singing "Baby it's cold outside" with her. It is a moment that is equal parts sweet and fucking illegal.

Another thing about that is weird. If you notice she is singing only the female parts, and then Ferrell sings the male parts. If she is unaware he is there, that means she's singing half of the song and pausing until the next line. Who does that? Anyways that's all for Elf. Only 10 more to go.....fuck.


Anyone who has clicked "LIKE" on the "j.Bowman Can't Sleep kind of official Facebook Page" is guaranteed a spot on Santa's nice list...only he'll never show it to you. He's kind of a dick like that.
Be a Fan
Posted by j.Bowman at 8:12 AM

My heart resides in Vancouver

Vancouver, if you were a girl I'd totally hit it.